I know I’m a bit late in the game, but when I was going to write the recap Monday morning I was squandered the night before by a continuous annoyance of buffering, literally happening every three seconds. And when I live streamed it from my Optimum App I missed out on some of the shocking moments. It left me confused and felt anti-climatic. It was a terrible idea to watch from my laptop but next Sunday I’ll try my best to watch it on the television screen. I managed to re-watch the entire episode again On Demand.

Jumping right into the third episode titled ‘Four Walls and a Roof’ some fates are sealed while other story arcs close out. It opens to the very night that Gareth and his band of Hunters kidnapped Bob to amputate his leg and then eat it over the fire like a giant barbecue chicken leg. Gareth is preaching to Bob about the importance of his cannibalism and how Bob is in a better position than the walkers that are behind a thin plate of glass inside the school. Gareth then says some creepy things when he mentions that women tend to taste better because of the extra layer of fat during child birth. He then tells Bob that Carol and Daryl drove off before they had time to get the jump on them. Bob then appears to be having a mental breakdown as he goes from crying to giggling. As Bob laughs he reveals to Gareth and his crew that he’s been bit on the shoulder by a walker and that he’s tainted meat. The Hunters begin throwing up the remains of Bob’s tainted leg. Eventually, Gareth kicks Bob in the face to shut him up. Nothing more can stray from irony in this scenario.

Back at Gabriel’s church Sasha is looking for Bob outside. Sasha, Tyreese and Rick return to the church when Sasha accuses Gabriel of being part of Bob’s sudden disappearance. Rick confronts Gabriel about what he truly done. Gabriel finally confesses that he always locked the doors, even from other people in his congregation who were seeking shelter and safety after the bombing of Atlanta. The scratches around the church exterior were women and children begging to get inside. The sound of the people shouting eventually lured the flesh eating corpses to come and devour them. A teary eyed Gabriel falls to the floor saying he did nothing to help them and instead buried their bones and remains after. The people damned Gabriel and now Gabriel feels that Rick and company have showed up to punish him of his sins. Before anyone has time to react or relate, Glenn sees someone outside. Low and behold, they find Bob lying on the grass with half his left leg gone. Behind Rick, marked recently in blood on the church wall is the letter ‘A’. ‘A’ symbolizes the train cart that Gareth and the rest of Terminus imprisoned Rick and his group at the end of Season 4.

Back inside the church, Bob says that Gareth and the remaining Termites ate half his leg, that Daryl and Carol took off with a car and that he’s been bit. Gabriel suggests they lay Bob on the coach in one of the back rooms. Sasha stays with him. Inside the chapel, Rick and Abraham are at odds after Abraham insists on all of them leaving for Washington D.C. immediately. Abraham does not want to risk staying as Eugene’s life is now in more danger. Rick disagrees and says they need to wait till Daryl and Carol return, in which he has a lot of faith in. After some bickering and Glenn getting between Rick and Abraham, they all compromise that in twelve hours Glenn, Maggie and Tara will join Abraham, Rosita and Eugene in heading to Washington via a school bus they found and got working. In the meantime, they will work together to settle the threat and put an end to the cannibals. Inside the room holding Bob, Tyreese is unable to convince Sasha to stay with Bob. Sasha does not understand why Tyreese thinks Sasha should forgive the Hunters. Tyreese stays by Bob’s bedside with knife in hand while Sasha joins Rick, Michonne, Glen, Maggie and Abraham to head towards the school only a few blocks away (Gabriel says). The rest of the crew who includes Carl, baby Judith, Eugene, Rosita, Tara and Gabriel hide and wait inside one of the back rooms while Gareth and his men head towards the church.

Once Gareth and the others are inside a darkened church, Gareth begins to give his spiel. Gareth and about five of his men (one woman) creep about the chapel room searching and carrying an arsenal of heavy weaponry. Gareth tries to communicate to Rick’s group by saying he is heavily armed and that the ‘A-Team’ has already left the building. Carl and the others wait in the room with their guns pointed at the door. This intense cold battle goes on for a few minutes until Judith cries. As the Hunters are about to blow down the door, a couple of silenced gun shots come from the shadows. Rick and his ‘A-Team’ step into the light as they get the dominate upper hand. Rick tells the last few Hunters to kneel beneath them. Gareth pleads to Rick and says they could forget about this and go their separate ways. Rick’s response is ‘he kept his promise’ and slices Gareth to pieces with his red machete. Abraham and Michonne take care of the remaining cannibals in by far one of the most brutal killings. Tyreese comes out of the room with a look of shock. Michonne gets her sword back. Pieces of who the hunters once were are scattered throughout the church floor as Gabriel mutters, ‘this is the lord’s house’ Maggie replies, ‘it’s just four walls and a roof’. Wow, in the zombie apocalypse religion seems to lose all meaning as faith in god diminishes from a church massacre. The only faith I believe they have in is in each other and the brutal instinct of survival. Has Rick gone mad or is this increasing brutally necessary for survival in this world? 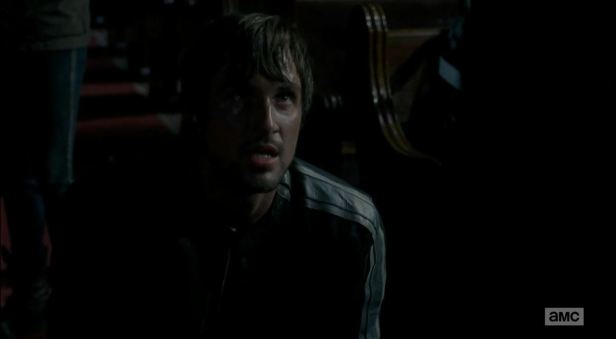 The next morning, Bob is lying on his death bed as everyone says their farewells. Bob thanks Rick for taking him into the prison. Bob tries to get a laugh out of Sasha. Sasha asks what Bob had to be so happy about when she realizes he just passed away. Sasha cries as Tyreese takes the knife and does the honor of stabbing Bob in the brain to prevent him from turning. It is upsetting that the only optimistic one of the group must perish. Rest in peace Bob.

Outside the church Abraham, Glenn, Maggie, Tara, Rosita and Eugene get ready for the long road to D.C. Abraham outlines the route on a map they’re taking and leaves it with Rick in case he wants to catch up to them later on. Abraham apologizes and admits that the new world needs Rick Grimes. Maggie and Glenn look unhappy inside the bus as they leave off and say goodbye. With the group now split, Rick awaits Daryl and Carol’s imminent return. Rick joins Tyreese in burying the body of Bob as Rick asks Tyreese what the road to Terminus was like for him. Tyreese gives Rick a vague reply as they talk it off.

That night, outside on the church steps Michonne looks at her Katana as she’s been separated from it since Terminus. Gabriel comes out and tells Michonne he never stops hearing the people scream. Michonne advises Gabriel that the guilt never ends but that traces of it go away at times. They then hear a noise coming from the trees. Gabriel goes inside and when Michonne goes to investigate the bushes, out comes a disgruntled Daryl. Michonne smiles until Daryl shouts through the trees behind him, “you can come out now!”. What’s Daryl up to and who is with him? Where is Carol? When will we see Beth? This episode had so many unanswered questions while other story-lines were settled.

I really enjoyed this episode as it had a lot to do with faith and darkness. It hardly had any walkers and was still compelling to watch. Faith was played out several times with Bob having optimism in the face of death while our protagonists gradually lost sight of humanity; getting closer to savagery. Tyreese seems to be the only one trying to keep perspective within reason while carrying the torch from Hershel. I am glad that hipster Gareth and his cannibal friends are finally gone though. This was by far one of the darkest episodes as it mainly took place at night as Rick’s group hid within the shadows. It was also dark in the sense of Rick’s group performing deeds equivalent to their adversaries, making them just as malicious. Will Rick and the others be able to stay on the path of justice and morality or will they drift into evil? Let’s hope not and join in on the discussion if you’d like in the comments below.

Keep watching as we discover what Beth has been up to this upcoming Sunday at 9/8 central on AMC.