The Hunger Games, which I saw the night it came out on March 23, 2012, was quite the experience. I never knew of or even heard of the book series, until I saw the first movie trailer in August of 2011. The movie has an ensemble cast of actors who have made big impressions in the movie business for years, such as Stanley Tucci, Donald Sutherland, Woody Harrelson, Elizabeth Banks, and West Bentley. There are also up and coming stars like Liam Hemsworth, Jennifer Lawrence, Josh Hutcherson, and Willow Shields. Even Lenny Kravitz had a small part in the film. Writer, Director and Producer Gary Ross has made two other successful movies like Pleasantville (1998) and Seabiscuit (2003) that have left enduring imprints in our hearts.

People, who think that The Hunger Games is merely a gut action blockbuster flick like Transformers, are wrong. Gary Ross adds a lot of soul and heart into this movie like what he did with Pleasantville and Seabiscuit. Gary Ross directed this movie on a large scale, but added enough intensity to each scene to keep viewers watching. He makes you relate to the evolution of the characters through their struggles, weaknesses, and strengths. I felt like I was watching an independent film.

In the beginning, Katniss Everdeen, the protagonist, tries to give her golden mockingjay pin to her younger sister, Primrose Everdeen (Willow Shields). Prim refuses and tells her to keep it. This scene was important because it was a foreshadowing of Katniss wearing the pin during the games. The pin symbolizes her district, as well as hope and courage. However, the pin seemed to not have enough significance in the film. Maybe Gary Ross is saving that idea for the sequels. 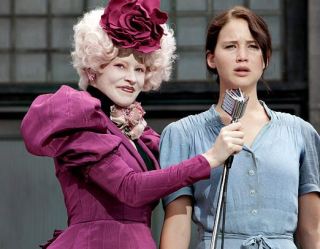 The film is set in a post-apocalyptic world where the remaining population in North America, known as Panem, is divided by twelve different districts. Panem is ruled by the Capitol. There once was a thirteenth district, but it was destroyed after a small rebellion broke out. Food is scarce and people look depressed and hopeless. Each year, the Capitol chooses 24 people to fight to the death on live television; twelve boys and twelve girls between the ages of 12 and 18. Katniss from the twelfth district is a young, but strong girl who looks after her mother and younger sister after her father died in a mining accident. Her character starts off as a tomboyish girl constantly being responsible and helpful by hunting for food in the forest. She eventually blossoms into an elegant, sexy, and beautiful woman that is possibly in love. Prim who had just turned twelve was chosen to fight in the games until Katniss steps in and volunteers to take her place as tribute. This courageous act leads her into the Capitol, a place that honors her and the rest of the tributes by bestowing them with gifts, food, and fame before the match.

The movie brings the idea of government control through the media. As in the film, the Capitol controls Panem through fear by forcing teenagers to fight in order to win food and pride for their district. I feel this topic is relevant today, because the media tends to leave out a lot of important news to the public.

What I realized is that the movie is all about survival. Katniss learns early on by her mentor, Haymitch Abernathy (Woody Harrelson), that the key to winning and surviving is to build sponsors and a fan base. Katniss is willing to do anything to survive and win for her sister as she tells Caesar Flickerman (Stanley Tucci), during their interview before the match. Not only will Katniss have to be skilled and trained, but she will have to build an audience like the reality TV show American Idol. The reason why Kelly Clarkson won was not only for her voice, but because America fell in love with her and Panim needed to fall in love with Katniss.

Opposite to Katniss was the boy who was chosen from her district, Peeta Mellark (Josh Hutcherson). Peeta is the son of a baker who only remembers Katniss after feeding bread to her and her family. Unlike Katniss, Peeta is willing to die in the games as himself and not as someone that the Capitol will mold into. If he was going to die then he was going to die with dignity and not be turned into some phony killing machine. He also never seemed to be afraid of death. In the film, there were several times when Peeta told Katniss that if it came down to them, he would let her kill him. Both Katniss and Peeta create an unlikely bond throughout the preparation and during the match.

The film also does a good job of showing that Katniss and Peeta are more civilized than the rest of the tributes. As the opponents from other districts race to eliminate everyone, Katniss and Peeta try to survive by hiding in trees, camouflaging in rocks, and grabbing potions. Katniss only killed other tributes through self-defense. Such as the scene when Katniss shot her arrow and killed an opponent for murdering Rue, a 12 year old tribute from District 11, who Katniss befriended. Katniss then gave Rue an honorable burial because Rue reminded her of Prim.This all reminded me of William Golding’s, Lord of the Flies and Richard Connell’s, “The Most Dangerous Game”.

In the beginning of Katniss’ journey, it appears that she dislikes Peeta and anyone else involved in The Hunger Games. She ultimately thought that Peeta told the world he liked her, so it would be easier to beat her in battle. She realizes later that he was in love with her. For this, she kissed him so that the Capitol would honor two winners instead of one. Regardless, the Capitol still wanted one winner until both Katniss and Peeta tried to commit suicide by eating poison berries. An act of sacrifice was what it took to change the games rules and rebel against President Snow (Donald Sutherland). However, it is unclear if Katniss had true feelings for Peeta at the end, or if it was just a ploy to help her friend live.

People who have read the books all said that Gary Ross did a great job of keeping the similarities between the book and the movie. According to interviews from some of the cast, Gary Ross added elements of how The Hunger Games match worked behind the scenes in the movie, while Suzanne Collins only wrote about the battlefields in the book. Also, the movie is much less gory and gruesome than the book. Gary Ross wanted to appeal to a larger audience regardless of the films adulterated content, where teenagers kill each other.

The idea of an execution game show originally stemmed from the 1987 movie, The Running Man and the Roman Empire when Gladiators killed each other for sport in the Coliseum. Caesar in The Hunger Games is even a reference to Julius Caesar.

I give this movie 3 out of 4 stars. It goes pretty quick for a two and a half hour movie. If you hadn’t seen it yet, I suggest you do. And now I want to read the books.